Loading and unloading the treestand can be done in seconds! The last thing a hunter on the way to or from a hunt wants is to waste 15 minutes of precious hunting time dealing with complicated gadgets. The treestand and all of its components can be set into the cushioned holding arms and secured instantly. The Power-Pak’s two holding straps keep the stand quietly in place even over the roughest terrain.

The Power-Pak is framed in aircraft aluminum and weighs only 4 lbs. It is designed to fit all popular brands of ATV’s and off-road vehicles that include a rear cargo rack. The Power-Pak installs quickly on any ATV with ordinary hand tools.

Made with pride in the USA! 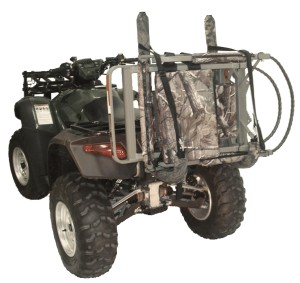